As shipping lines have seen their fortunes made after a period of severe decline in volumes during the pandemic, ports and terminals have not fared so well in Europe’s key region, of the Hamburg – Le Havre range where volumes have declined by more than a third in some cases.

Vessel operators have the option of moving their assets around to the regions and trades exhibiting the greatest level of demand. Terminal operators have no such advantage, with huge investments in fixed assets to provide the interlinking infrastructure between ocean and landside movements within the supply chain.

As a result of the pandemic, North European ports have suffered a substantial decrease in cargo volumes, handling 31.3 million TEU over the first nine months of the year, a 6% fall on the previous year’s volumes.

Wilhelmshaven in Germany was the most affected port, according to DynaLiners, with a 35% year-on-year decline in volumes seeing its market share also fall a remarkable 30%. French facility Le Havre lost nearly a quarter of its volumes in the same period, with a 23% decline in volumes resulting in an 18% loss in market share. 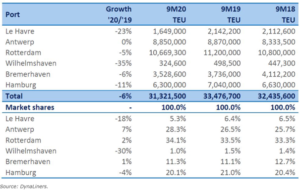 Only Antwerp’s figures did not stray into negative territory, with the port managing to break even compared to the first nine months of 2019, in terms of throughput, while gaining 7% in market share.

As a result of the decline in volumes, particularly in the Asia to Europe trades, Europe’s leading independent terminal operator Eurogate has suffered volume declines in its terminals in Germany, 8%, and the Mediterranean, which fell 10%, according to Dynaliners figures.

Eurogate launching plans to save euro 84 million a year

With facilities in Bremerhaven, Hamburg and Wilhelmshaven in Germany and the company’s Italian operations with further investments in Lisbon, Tangier, Ust Luga and Limassol, Eurogate and its subsidiary Contship Italia have suffered significant volume declines. These declines include the aforementioned Wilhelmshaven at 35%, the Italian operations at 19% and Tangier at 13%.

“Hamburg-based HHLA saw its combined container handlings go down by 11.2% to 5.1 million TEU,” said DynaLiners, and these figures include volumes at HHLA’s facilities in Odessa, Ukraine and Tallinn, Estonia.

“Eurogate, which is facing falling volumes and financial losses, has announced cost savings in the order of €84 million (US$102 million) a year, to be realised in full from 2024,” added DynaLiners. 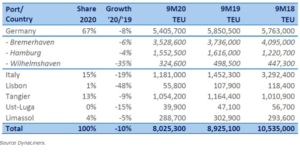