Delta Air Lines cranked up cargo revenue in the fourth quarter to $204 million, a 10% gain over the same period a year ago and a big improvement from the prior two quarters. Overall, the company met Wall Street expectations with an adjusted pretax loss of $2.1 billion on $4 billion in revenue.

The pretax loss of $2.53 per share came in slightly higher than the consensus among analysts of $2.50 and revenue was also above the estimate of $3.6 billion. In the third quarter, Delta’s pretax loss was $2.6 billion.
Fourth-quarter revenue was 69% below the 2019 period and the carrier operated at 38% of its seat capacity.

Delta projects it will stop burning cash reserves in the spring, but how it gets there remains unclear. It reported an average cash burn of $12 million per day in the fourth quarter and shows no improvement in that area for the first quarter of 2021 ($10 million to $15 million daily).

The burn rate is about 90% better, however, than it was at the start of the pandemic in March. Ending the drain on the cash pool is taking longer than expected as coronavirus infections spike and forward bookings decrease. The carrier will need further improvement in bookings to achieve daily breakeven, which should happen once COVID vaccinations become more common and herd immunity sets in later this year.

“We see three distinct phases in 2021. The early part of the year will be characterized by choppy demand recovery and a booking curve that remains compressed, followed by an inflection point and finally a sustained demand recovery as customer confidence gains momentum, vaccinations become widespread and offices reopen,” said Delta President Glen Hauenstein. “For each phase,

Delta has the levers to pull to successfully react to the emerging demand environment, including tightly matching our sellable capacity to expected demand.” 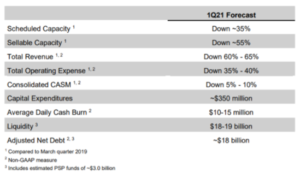 Cargo has been one of the few bright spots for passenger airlines since the start of the pandemic, with the reduction in flights constraining goods movement and leading to a spike in yields that encouraged carriers to assign idle aircraft to dedicated cargo service.

Delta has been slower than many rivals to add cargo-only flights, which partly explains the 42% and 25% drops in revenue during the second and third quarters, respectively, from the prior year. But the airline increased its mini-freighter activity in the fourth quarter and began flying limited shipments of COVID-19 vaccines, helping it pocket $62 million more in cargo revenue than during the third quarter.

On Dec. 1, Delta promoted logistics veteran Robert Walpole to take over the cargo division. This week it announced Jannie Davel joined the airline as managing director of commercial and that Vishal Bhatnagar has been promoted to managing director of global cargo operations. Davel previously held top management positions at DHL Global Forwarding and Emirates SkyCargo.

Delta narrowed operating expenses by 47% in the fourth quarter

Fourth-quarter operating expenses decreased 47%, or $4.6 billion, helped by a 64% reduction in fuel spend. Maintenance costs also fell 51% and salaries were down 34% as nearly 18,000 employees elected to voluntarily leave the company and others took unpaid leave or fewer work hours to help the company save money.

For the year, Delta reported an adjusted loss of $9 billion on $15.9 billion in revenue. It ended the year with $16.7 billion in cash and other liquid assets.

The company anticipates receiving about $3 billion from the U.S. Treasury under the Payroll Support Program extension this quarter. With those funds, the company expects to end March with $18 billion to $19 billion in liquidity.

Last year, Delta received $5.6 billion in federal proceeds through the CARES Act to maintain its labor force, including $1.6 billion in low-interest rate loans and issuance of warrants for over 6.7 million shares. It also completed more than $25 billion in financing transactions, including $9 billion in SkyMiles financing, the largest debt financing in aviation history.

The airline also made significant moves to reduce capital expenditures with an eye toward operating a smaller, leaner business for the foreseeable future. It restructured its aircraft order book, reducing aircraft purchase commitments by $2 billion in 2020 and $5 billion through 2022. Fleet simplification plans accelerated with the retirement of 227 aircraft. The airline now operates 11 types of aircraft after the entire Boeing 777 and MD-80 fleets were dropped. Delta said it expects to eliminate nearly 400 aircraft through 2025, leaving it with nine fleet families.