Air cargo started the year on a positive note, with industry-wide cargo tonne-kilometres (CTKs) rising above the pre-pandemic levels for the first time since the crisis started (+1.1% vs. January 2019).

North America and Africa were the strongest performers, with CTKs up by a robust 11.7% and 21.1%, respectively compared with the pre-crisis period (Jan 2019). 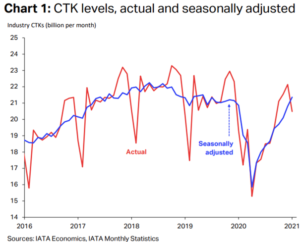 Different timing of the Chinese New Year can distort growth rates at the start of each year, and therefore we will have to wait for February data to get a more complete picture of the state of cargo demand. Also, note that comparing 2021 traffic data with 2020 levels will result in abnormally high growth outcomes due to very low cargo volumes a year ago.

However, conditions in the manufacturing sector – which is more relevant for air cargo business – remained robust. Indeed, global manufacturing PMI was at 53.5 in January, where anything above 50 indicates expansion vs. the previous month. 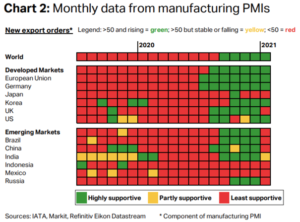 New export orders component of the manufacturing PMI – a leading indicator of air cargo demand in the past – continued to point to further CTK improvement.

That said, the performance of the metric was less robust compared with Q42020 as COVID-19 outbreaks negatively impacted export business in emerging markets (Chart 2). Should the weakness continue or spread to other countries, it might weigh on the near-term air cargo growth.

Overall, the Q4 GDP results show that the global economic activity continues to recover from the crisis, even though there are some differences across markets due to new restrictions. Developments in global goods trade are also positive; the latest CPB Monitor indicates that December trade volumes exceeded early-2020 levels (up 0.6% vs. November).

GDP growth and inventory levels expected to perform strong in 2021

Looking forward, the economic backdrop should continue to improve further, with the IMF forecasting 5.1% GDP growth in 2021 vs. 2020. The economic rebound will boost consumer spending, including online shopping, which has played an important role in air cargo recovery in some key markets (e.g. the US).

Another supportive factor for air cargo developments is that the level of inventories remains relatively low compared to sales volumes (Chart 3). Historically, this meant that businesses had to quickly refill their stocks, for which they also used air cargo services. 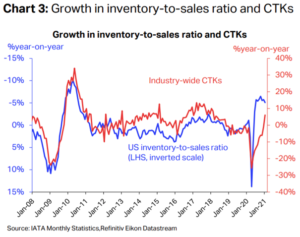 Belly capacity remains under pressure due to vaccine distribution getting priority

Finally, air cargo will also continue to play a crucial role in the distribution of vaccines. The global infection rate remains elevated, which indicates that the health crisis is still far from over. Air transport will provide the speed necessary to get the vaccines to places where they are needed the most.

Once the virus is contained, the demand for air cargo vaccine shipments might ease but that will take some time. Capacity falls amidst groundings of passenger jets Despite the supportive factors mentioned above, the lack of capacity remains a challenge to further CTK growth.

The virus resurgence over December and January meant that many airlines reduced their passenger flight frequency and grounded aircraft. This resulted in a renewed pressure on belly cargo capacity, which had been recovering only slowly from the through in April.

Overall, the industry-wide available cargo tonnekilometres (ACTKs) fell by 5% month-on-month in January – the first monthly decline since the recovery from the crisis started in May (Chart 4).

The month-onmonth capacity contractions were broad-based and were the most significant in North America (-6.8%mom) and Asia Pacific (-8.5%mom). On international routes, the bellyhold cargo capacity fell by 49% compared to January 2019 while freighter capacity expanded by 29% over the same period. 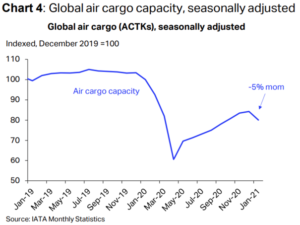 This month’s decline in cargo capacity resulted in a sharp uptick in industry-wide cargo load factor which had been already elevated during most of 2020. The global CLF reached 58.9%, a record high outcome for any month of January in the history of our time series. Amongst the regions, Asia Pacific posted the highest CLF, at 66.5% (+16.1ppts vs. January 2019). 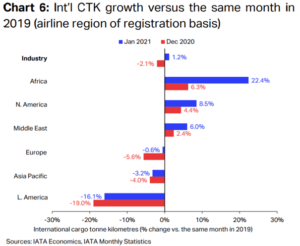 As was the case in the previous month, African airlines topped the international traffic growth chart. Their international CTKs expanded by 22.4% compared with January 2019, supported by a robust expansion on the Asia-Africa trade lanes (Chart 7). 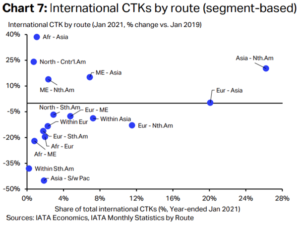 The US economic activity continues to recover, and its January manufacturing PMI reached a new record-high, pointing to a supportive business environment for air cargo. Moreover, if the planned $1.9 trillion US government stimulus is approved, it will boost already robust consumer spending this year, including online sales.

This bodes well for the market’s near-team air cargo outlook. The Middle East also performed well… International CTKs flown by Middle Eastern airlines hovered above the pre-crisis levels for the second consecutive month (+6% vs. Jan 2019). Of the region’s key international routes, ME-Asia and MENth.Am have provided the most significant support (up 15.1% & 13.9%, respectively vs. Jan 2019). 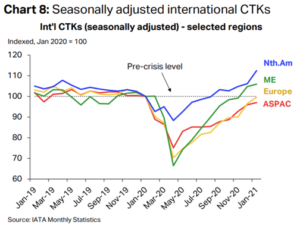 Europe set to exceed the pre-crisis level next month Although Europe’s international traffic remained in the contraction territory, it showed a robust improvement compared with December (+3.1% mom). Should the current growth trend continue, the market will reach its pre-crisis levels next month. For now, the prospects are positive since Eurozone’s new export orders PMI points to a further CTK expansion (at 54.7).

Int’l capacity recovery in stalling in Asia Pacific Asia Pacific carriers are also eyeing CTK recovery. In January, they reported int’l CTKs 3.2% lower vs. the pre-pandemic period, an improvement on 4.0%yoy decline in December. The recovery in the market’s international capacity has been stagnating (-27% vs. Jan 2019), which has likely contributed to the delayed CTK rebound vs. the other regions.

Latin America continues to lag behind other regions… Latin American int’l CTKs fell by 16% vs. the pre-crisis period – a better outcome compared with December (-19.0%yoy). The region’s volumes have been volatile since early Q4, therefore it remains unclear if the uptick continues into February. For now, drivers of air cargo demand in Latin America – including economic activity and export orders – remain relatively less supportive than in the other regions.