New analysis from Danish consultancy Sea-Intelligence shows just how much North America is to blame for the severe equipment imbalances challenging the global container shipping industry.

The continent’s comparatively slow handling of containers has long been a source of supply chain pain and a leading cause of empty container shortages in Asia, but never to the extent recorded today.

Sea-Intellligence warned in its latest weekly report that the structural supply chain imbalances related to empty containers are not approaching normalisation.

“The imbalance problem now needs to be rectified through North America – which at the same time is the place with the worst port congestion problems, which slows down efforts to repatriate containers,” the report from Sea-Intelligence stated.

The issue was widely discussed at this year’s virtual TPM conference – the world’s largest container shipping gathering. Speaking at the event, Jeremy Nixon, the CEO of Japanese liner Ocean Network Express (ONE), pointed out that terminal productivity in North America lags Asian counterparts by up to 50% thanks to less working hours. 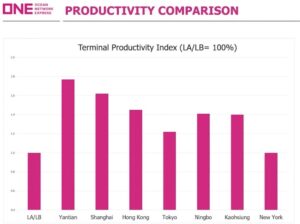 Speaking at the same event, Vincent Clerc, the CEO of A.P. Moller-Maersk Ocean & Logistics, the world’s largest container line, said the underinvestment along the coastline of North America was a critical part of today’s backed-up box crisis.

US regulator, the Federal Maritime Commission, is looking into the issue of equipment availability as part of a wide ranging investigation into the supply chain chaos that has hit the nation’s ports, retailers and exporters over the past eight months.

Latest data from PIERS, which tracks US imports and exports, shows container volumes from Asia to the US grew 90% in March compared to March 2020. Even when comparing March 2021’s figure to the pre-pandemic March 2019, the volume growth is up by a record 57%.