The OMA Group (omagroup-wa.com) is pleased to announce the recent completion of an amicable management buy-out of its business interests in full.

The MBO provides the OMA Group with a platform upon which to further develop this successful business as well as providing certainty in the Group’s future strategic direction.

The new Shareholders and Board of Directors of the OMA Group (pictured here left to right: Gary Miller, Carine Noukpo, Sam Edmund) comprises a mix of leading West African talent & experience in the shipping and logistics sectors, together with industry veterans having intimate knowledge in their respective fields. 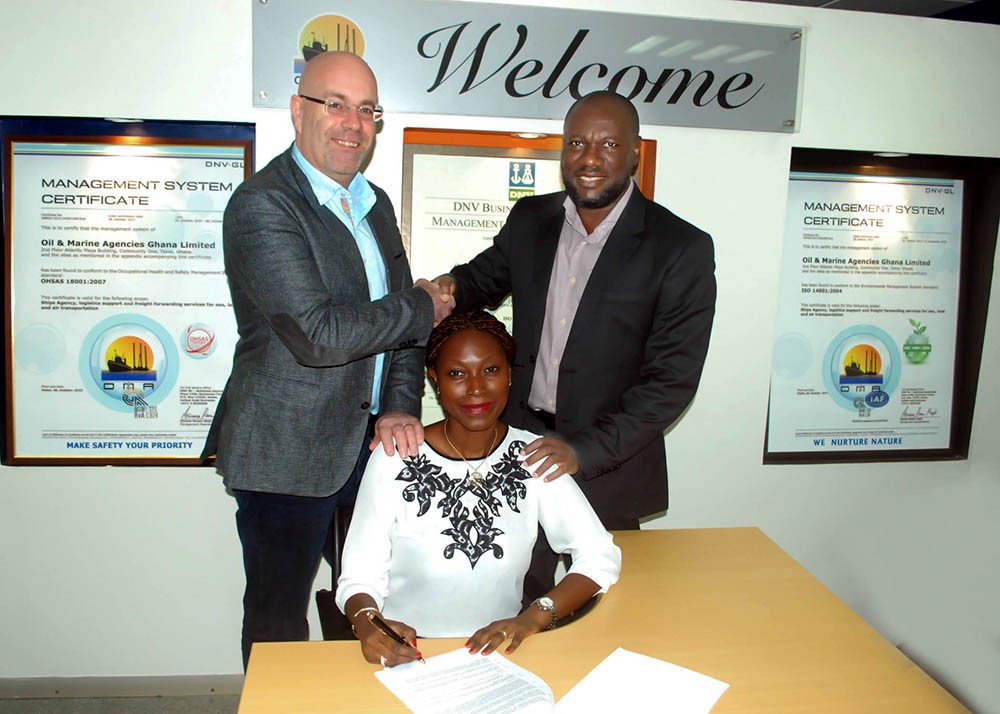 This powerful combination of an experienced, enthusiastic and re-energised Board of Directors, supported by a loyal and committed management team and staff is already resulting in a reinforced commitment to offer the best quality, value-for-money services to customers operating in the existing OMA countries.

OMA is also actively expanding the Group’s activities in West Africa with plans already in place to build upon customer-identified business opportunities in Senegal and Cameroon.

The proud history of OMA Group maintaining long-standing relationships with its customers and suppliers for over 30 years, will continue as it always has done.

Background to the MBO

Independent ship agency OMA was established in 1982, by entrepreneur and founder, Captain R A M Jones. Together with its marine services affiliate, Togo Oil and Marine, both companies developed from a modest beginning in Lomé, Togo, to become leading service providers in their respective fields in Togo, offering customers unsurpassed local knowledge and expertise.

It was in 2007 that Gary L Miller joined the company as Managing Director and brought with him his wealth of knowledge and experience, built up over many years working in the ports & liner shipping sector in both Europe and West Africa.

Miller’s primary objective was to expand the OMA footprint in West Africa and offices in Benin, Ghana and Ivory Coast were added to founding office in Togo.

In 2008 Carine Noukpo returned to Cotonou to lead the development of OMA Benin and in 2009, Sam Edmund joined the company to establish OMA Ghana.

With an ever increasing commitment to the agency & logistics business, it soon became apparent that OMA and its sister company, TOM, were heading in different directions from a strategic and business development perspective.