Now that President Joe Biden has signed into law the biggest investment in freight transportation in 65 years, the question turns to how quickly the money can reconnect the links of a broken supply chain.

The Infrastructure Investment and Jobs Act (IIJA) includes $110 billion for roads, bridges and major infrastructure projects, $66 billion for freight and passenger rail, and $17.4 billion for ports and inland waterway improvements.

“It’s the most important, historic, immediate and impactful decision that directly addresses our nation’s ailing supply chain,” Chris Spear, American Trucking Associations president and CEO, testified at a supply chain hearing on Capitol Hill last week. “My members begged for this to happen.”

But how immediate an effect those billions of dollars will have on supply chain velocity is uncertain. It will depend, in part, on how long the current backlogs can be channeled through the system — and some analysts predict that will not occur before the end of 2022.

Ben Johnston, chief operating officer of business and industrial equipment financing company Kapitus, said the Biden administration planned to prioritize applications for port projects in an effort to speed funding to where the highest-profile supply chain disruptions are occurring.

“However, even the most aggressive timelines indicate 45-90 days for application review and approval of the first projects,” Johnston told FreightWaves.

“From there, it will take months to years for these projects to be completed. Similar timelines exist for road and bridge construction, freight rail and airport improvements, but without the accelerated application process that ports will receive. This means that while much-needed investment is on the way, it is unlikely to ease current supply chain bottlenecks in 2022, and many of the benefits may not be completed until 2023 or beyond.”

But that assessment may not fully take into account flexibility by states to get smaller local projects up and running — particularly in places like Southern California, targeted as ground zero of the crisis and where small changes could make a big difference.

“Much of the problem [at the ports of Los Angeles and Long Beach] is on the land side where the port connects with railroads and trucks,” Maria Lehman, director of U.S. infrastructure at engineering and construction firm GHD, told FreightWaves.

“Because the states control the property, some of these areas can be quickly repaired — six months to a year to make short-term improvements, and even faster depending on the problem, which can help reduce congestion. These could be intermodal connectors, maybe improving marshaling areas for containers and chassis. In some cases money for these can start flowing right away.”

Lehman, who is also president-elect of the American Society of Civil Engineers, added that because the IIJA includes a five-year reauthorization of the highway bill, states can begin opening up their budgets and moving quickly knowing that federal money that supplements local projects will soon be in the pipeline.

“It’s also critical that the carriers are collaborating now with the ports to help determine what would be the most impactful investments they can make to improve cargo flow in short order,” Lehman said.

Making the most from federal funds

In August, the White House published a fact sheet outlining how much money each state could expect to receive from the IIJA in both formula funding, which is set by Congress through the five-year reauthorization, and new funds.

The current conditions and cost effectiveness of state-controlled highways (including Interstate and National Highway systems) is highlighted by the libertarian-leaning Reason Foundation, which updated its Annual Highway Report on Thursday (see map). The report provides a way to assess how important federal money received by each state will be in improving local highway infrastructure, in the short or long term. 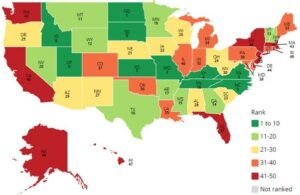 “Nationally, the study finds America’s highway system is incrementally improving in almost every category,” according to the report. “However, a 10-year average indicates the nation’s highway system problems are concentrated in the bottom 10 states and, despite spending more and more money, these worst-performing states are finding it difficult to improve.”

Prodding from the top

With midterm elections looming large next year, the Biden administration is deploying Cabinet-level officials, and the president himself, on a tour to “sell” the IIJA around the country to help states take advantage of the money and see results as soon as possible. An action plan unveiled days before Biden signed the bill into law sets a series of short- and medium-term timelines designed to mobilize agencies and lay the foundation for implementing the IIJA.

During a press briefing at the Port of Los Angeles on Tuesday, Transportation Secretary Pete Buttigieg said his department will soon publish a “playbook” for states on how to best use the grant and loan programs that are either growing or being created to support goods movement.

“State-level plans will look at supply chain cargo flows, inventories of commercial ports, and will assess the impact of e-commerce on freight infrastructure, which has changed the game more quickly than some of our infrastructure can keep up with,” Buttigieg said.

Funding for longer-term projects — aimed at preventing another crisis like the one the country is currently experiencing — will be prioritized according to their regional and national economic significance for major freight corridors.

Among those submitted by members of CAGTC that have already received initial state and federal funding are: