February showed a worldwide year-on-year (YoY) weight increase of 1.1 percent, accompanied by a yield/rate increase in USD of 84 percent. After a strong volume drop in the middle of the month, the end of the month showed a strong recovery, revealed a report by WorldACD.

“Due to the annually changing dates of Chinese New Year (CNY), we traditionally look at the months of January and February together. Though counting one day less than in the leap year 2020, the YoY figures for these two months are + 0.9 percent in weight and +79 percent in yield/rate (in USD).

Within the two months’ period, yields/rates increased by 4 percent MoM and the load factors went up by 3.2 percentage points MoM,” observed WorldACD.

However, as always, worldwide averages need to be broken down in order to get the real state-of-affairs. Volumes are the best indicator of where things stand over a longer period: we compared the period Jan/Feb 2021 with the corresponding periods in the past three years. 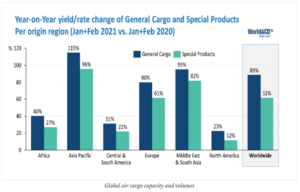 Asia Pacific, one of the six main regions charted by WorldACD, is in a class of its own, emphasizing the increasing importance of the region in world trade. Except from the sub-region Australasia & the Pacific (-26 percent YoY), air cargo exports kept growing, particularly from the sub-regions China and North East Asia, showing YoY growth figures of 46 percent and 24 percent respectively.

For the other 19 “sub-regions”, the picture is drastically different. Apart from 3 small sub-regions (Central Africa, Mexico and Central Asia), all sub-regions showed a decrease in outgoing business in 2021 compared to each of the three foregoing years.

“Digging a few levels deeper, we are reminded that air cargo is not only about business from Shanghai and Hong Kong, important though these markets may be: of the larger 15 city-to-city markets growing by more than 100 percent YoY in Jan/Feb, only two had Shanghai as their origin, and one Hong Kong.

The 12 other markets had diverse origin cities, including Paris, Liege, Nairobi, Beirut, Los Angeles and New York. The highest MoM growth was recorded in the market from Japan to USA Midwest, in kilograms, but also in yields/rates,” the report added.

All six regions (Africa, Asia Pacific, Central and South America, Europe, MESA and North America) behave in the same way when it comes to increases in yields/rates: in all regions the yield/rate growth YoY continues to be stronger in general cargo than in special cargo.

That is not the case when it comes to volumes: with a YoY growth of 29 percent YoY, vulnerable cargo and high tech very clearly outpace not only the market as a whole, but also score much better than all other large special cargo categories, including temperature-controlled pharma, which were all negative YoY.

From Asia Pacific, the high tech segment increased by more 25 percent YoY in each regional direction, fueled by the worldwide demand for work-from-home devices.

The highest rates in air cargo at the moment are paid for business originating in South Korea, both eastbound and westbound: demand for Covid-19 diagnostic kits and a sea/air transfer play an important role here.

Lastly, worldwide volumes at the beginning of March were slightly higher than at the end of February: an early sign that the month will be positive. Many individual markets will no doubt experience a different reality once again.